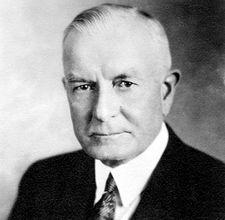 This article was originally written by Kevin Maney on 10/10/08 during the heart of The Great Recession:

IBM is currently one of the largest corporations in the world, but even the smallest local businesses can learn a valuable lesson from how this great company positioned itself for future success during terrible economic conditions.

IBM has a habit of being a beacon during economic calamity. Of course, its earnings yesterday helped everyone feel for at least a moment that the world wasn’t coming to an end. But that pales in comparison to IBM’s feat during the Great Depression. Hopefully, we’ll see more of the same from the company. I know about this because I wrote a book about the guy who built IBM, Thomas Watson Sr., titled The Maverick and His Machine.

IBM may seem pretty staid today, but Watson was actually quite the gambler. As the Depression killed off IBM customers and forced others to cut back on orders, Watson pledged that he would not shut a single factory or lay off a single worker. In fact, he recognized that while his competitors were down, he could make investments that would better position IBM when the economy turned around.

In 1932, he announced that IBM would spend $1 million — an enormous sum for the company then — to build a stand-alone R&D lab in Endicott, N.Y. every competitor at the time was slicing R&D. Watson added employees and expanded factory capacity. If no one was ordering IBM punch-card machines, Watson told the factories to keep making machines and spare parts and store them in warehouses.

As sales stalled, this put enormous financial pressure on IBM. Investors started pitching a fit. In 1932, IBM shares fell to 1921 levels. The board of directors started discussing firing Watson, but he held them off. As the late, great Peter Drucker told me about Watson, “He didn’t know how close he’d come to collapse.”

In 1935, Watson’s stubbornness paid off. That year, FDR signed the Social Security Act, instantly creating enormous demand for data processing machines. The government needed them to process claims and companies needed them to gather and send information to the government. IBM had been stockpiling machines and investing in new technologies, while competitors had shut factories and stopped R&D. IBM cleaned up — and in fact that moment was the slingshot that allowed IBM to utterly dominate the IT industry for the next 50 years.

In the process, Watson got rich during the worst economic despair in U.S. history. In the late-1930s, he was one of the highest-paid Americans, making more than $350,000 a year — more than $5.2 million in today’s dollars.

If today’s executives remember that lesson, we’ll get out of this economic jam a whole lot sooner.

6/6/14 – How did you run your business during the recent Great Recession? Did you go into “retreat” mode with your marketing efforts? Or did you position yourself for future success by staying aggressive like Thomas Watson Sr. did during the Great Depression? While many business owners were using the tough economic conditions as an excuse to stop investing in their business, others made smart, strategic investments into SEO, social media marketing and cutting-edge website development. The businesses that took advantage of the opportunities that the economic recession created are dominating the competition right now and will likely continue to in the future.